I believe the biggest problem with it is not only the unsympathetic nature of the narrator, but the way Knight presents Rojan and his thoughts, or better said, the repetition of his negativity. If his quips had been presented with a little more originality or even a little more diversity given on a range of topics, I might have enjoyed the experience a little more. It's evident that Knight has plotted out a stronger story than the previous one. But Rojan hammers on religion, class warfare, racism, and the black.

Mostly religion and the black. It was annoying. Not only that, but every scene is overwritten with internal monologues that fill the pages. For me, a person who loves a good internal debate and description, this was NOT the way to do it. Maybe it was from the narrative voice that wasn't as compelling as it should've been. Or perhaps all of the telling, not showing.


Or the run-ons. Or the lack of a map. Or the repetition. Okay, I might just be grasping at straws here, but there was a problem with this second novel.

And I believe it might've been the potential that was squandered. Dialogue can be great, when it's not delving into loads of lazy profanity. The plot is hidden with some strong twists that caught me off guard, but that's because the majority are predictable. The occasional turn of phrase is nice, but ruined when used as a transition to another scene when a break would've sufficed.

It's in the execution that Knight failed, I think, seeing as she has a remarkable world that very much needs either a map or more world-building , and a simply amazing magic system. Truly, the latter is the series's hallmark. If there was any other reason I kept on going besides having the 3rd , it was because whenever Rojan needs to dwell deep into the darkness, Knight can write it well. The verbosity is rewarded in these passages, in every squeamish remark. My question is: Where was this throughout the rest of the book? I'm not sure. In summary, if Knight had taken the first and last sentence of each paragraph, and had only those for this book, we would have had a breathtaking second installment.

Instead, we have beauty that teeters down into ridiculousness.

But what we have is choppy negativity that does nothing, but bore the reader. At the end of the day, Before the Fall is a predictable, overwritten book with no tension and barely any character development for the entire cast, save till the end. It's slow and borderline insulting with all the repetition of which I can't repeat enough , and especially with the many, many typos and run-ons from a big name publisher.

Call me crazy, but Pasha should've been the protagonist. At least he was tolerable with some semblance of an arc. Aug 17, Dimana Atanassova rated it liked it. 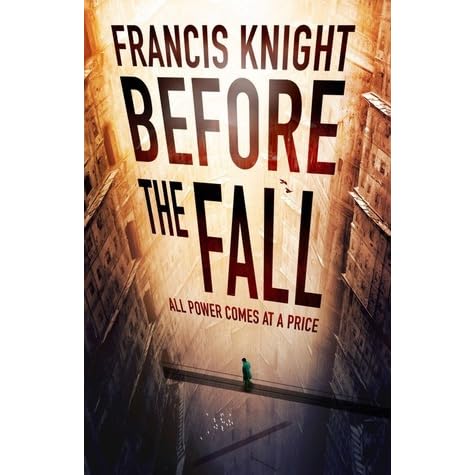 I liked "Fade to Black". In fact, I loved it - it fell one star short of being in my "favorites" list. The premise behind the pain mage and the city of Mahala was fascinating, the book was wonderfully written, especially for a debut, and the sarcastic comments of Rojan Dizon fitted the story perfectly. So, naturally, I thought the sequel would be even better, especially as it promised to expand the story beyond just Mahala.

I didn't like "Before the Fall" - I didn't hate, either, but it just felt kind of What I liked about the book: - City of Mahala: still a marvelous idea, still captivating with all its layers and how different the inhabitants of each one are - the writing: Francis Knight does know how to write and she also gives each and every one of her characters a unique and distinctive voice, which makes them feel like real people - Rojan: he's pretty much the same guy as in "Fade to Black", so if you hated him then, you'll hate him now, as well.

He's actually the only character we see evolving I'll get to that later - he's less selfish, though still preoccupied with himself.

I liked how Knight built his relationship with Pasha and how it eventually evolved into a delicate, though beautiful friendship. And how about the things I didn't like Sure, it was fun and interesting and refreshing the first couple of pages, but his obsession with hating the Goddess, hating the Ministry, hating the structure of Mahala and generally everything else really got on my nerves.

I have to say, I liked Erlat, though I felt like her character was largely underdeveloped. To me, it seemed like all characters were just one big device to move the plot forward - they all kind of blended with the background. In "Fade to Black", I was fascinated with the Little Whores - I wanted to read more about how they came to be and how their past affected the people they became.

Sure, we got a glimpse into how the Outer world looked, but not enough to spark my interest. The plot twists view spoiler [Dench turning out to be a traitor, the priest's daughter turning out to be the killer hide spoiler ] weren't entirely predictable, but still didn't feel like major events. I never like when the justification for one's actions is plainly "they're batshit crazy".

Sure, I understand how her past might have influenced her and make her hate the pain mages, but still, her motives felt kind of stretched and her actions - forced in order to move the plot forward. Knight's writing is still marvellous and the City of Mahala is a captivating place to read about. It seems, however, that the author focused too much on politics and forgot about her characters, which is what made me give the book only 3 stars.

I liked Rojan, despite his constant moaning and sarcasm, so I'll definitely read "Last to Rise". May 08, JJ DeBenedictis rated it liked it.

I felt a bit under-educated regarding the world-building, probably due to the fact I hadn't read the first book, but this series is set in a pillar of a city -- a completely-enclosed cylinder with light filtering down the centre of it. As you can imagine, the lower you go, the less-nice of a place it is to live in, and the protagonist is living down in the scummy sections. The setting feels very industrial, even though the technology level is roughly steam-punk and the city is mostly powered by magic. The protagonist is an atheist in an intensely religious world to me, the religion seemed like Christianity if you transplanted the Hindu goddess Durga into the middle of it who is a pain-mage, i.

He's using this magic to help power the city after the previous book wiped out the pain-mage torture-chambers that were keeping the lights on and the food production going. In the meanwhile, someone is killing pain-mage boys before they can be recruited to help with this task, and the neighbour-states in the outside world are poised to crack the city open and take over while it's weak and starving.

I won't get too much more into the plot. The story itself sometimes tried a bit too hard to make the protagonist seem gritty, and occasionally it felt like he wasn't catching on to the clues as quickly as I was. Also, for a religious place that worships a goddess, the city had an oddly male-dominated society; only men are mages, and seemingly only men hold positions of power.

Much like the city's religion, it felt to me like the author had a neat central idea and then packed a filler of familiarity around it that wasn't a particularly good fit. But despite those few quibbles, this really was a very entertaining book, with lots of action and some very lively and varied characters. It's not deep, but it's solidly enjoyable, and I will definitely pick up more in this series. May 02, Rusty's Ghost Engine also known as Jinky Spring rated it liked it Shelves: sci-fi-or-dystopia , high-fantasy , that-don-t-impress-me-much.

This review has been hidden because it contains spoilers. To view it, click here. The basic role of this book was that Dench the leader of a religious sect of warriors known as Specials who serve only the Goddess but are manipulated by the Ministry and another official of the ministry thought that the only way to save the city and bring back power was to accept the Storads an outside nation offer for coal. This was why pain mages were killed throughout the city and a gener 2. This was why pain mages were killed throughout the city and a generator sabotaged but Rojans brother, the city's ruler saw that if they did accept the Storad's bargain then all of Mahala would have been made slaves of sorts so believed pain magic was the way forward and what made the city special and powerful and in the end they came up with a device to amplify pain without causing the mages too much discomfort.

For me the action and sense of pace was good I also liked how Rojan's character developed and how he became less self-centered well almost but towards the end things started to get boring and dull. When Rojan entered Top of The World things also were quite predictable from there on, there just weren't many surprises. I was glad the levels of the city and the laws there were described more and the setting of the vertical city still feels very real.

I don't know I can't really explain why the conclusion was a disappointment but I've still got the last book and will finish reading this series I never know there might be some surprising turns up ahead Mar 23, Richard Bray rated it it was ok. Rojan is described as an irresponsible womanizer, but we never really see any of this. Through the first two books, I believe he only sleeps with one woman, and the other characters consistently look to him to handle many of their problems, which he does.

That being said, I really like the world despite some of the unevenness. Jan 17, Cameron rated it liked it. The plot was a little more intricate and the pacing better; that is to say I felt that things moved along rather quickly enough without getting too bogged down in exposition too much of that in the first book , and that overall the plot was a lot tighter. Some of the "reveals" as the main character unfolds the mystery weren't really too hard to see coming, but there were more layers to the characters, I felt, and that added depth to the story overall.


It's even more intricate, confusing, full of mystery and layers of complexity, and full of conflicting emotions than in the first book. I would love to explore this city, upside and down.

Before the Fall by Noah Hawley Audiobook Part 01

While I wasn't too sure I'd continue with this series after reading the first book, I am definitely looking forward to starting the third.